Our Favorite Posts: The Gentle Leadership of Tenzin Taklha 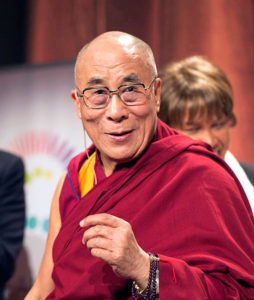 When asked what he did for the Dalai Lama, without a blink, Tenzin Taklha responded modestly, “I cook his meals and make sure his tea is hot.”

I met Tenzin Taklha six years ago on a planning committee for an ecumenical gathering of spiritual leaders that included Muslims, Buddhists, Christians, Jews and people of other faiths, along with academics, political personalities, community leaders and worshippers. His Holiness the 14th Dalai Lama was to host the gathering, and share stories about how Muslims and Buddhists lived for hundreds of years in peace and harmony in Tibet. The organizers wanted the gathering to examine ways that people today could find a similar peace together while honoring each other’s different religious practices and cultures.

Throughout the planning process, Tenzin Taklha never invoked his title as head spokesman for His Holiness the Dalai Lama in the Government of Tibet in Exile, even though he had the full authority to decide for His Holiness. The planning committee had in-depth discussions at our preparatory meetings about all aspects of the program including security in coordination with the FBI, media messages, and programmatic content. Tenzin Taklha spoke sparingly at these meetings, but when he did, he eloquently shared the Dalai Lama’s principles of equality, humility and gentleness.

During our weekly conference calls, it was clear that he was a personage at the highest level of His Holiness’ Tibetan Office. When offered the plush, marble-floored penthouse Presidential Suite for His Holiness’ use at the Top of the Mark Hotel, Tenzin Taklha demurred, choosing a far simpler suite for the Dalai Lama and the six monks who would share his room with him. He gently thanked, but declined at least ten offers of private jets from spirited entrepreneurs vying to personally pick up His Holiness from India and deliver him to any private airport: Tokyo, Honolulu, San Francisco . . . anywhere in their own private jets. “His Holiness likes to travel in commercial planes, actually, he flies economy seats,” Tenzin Taklha explained. “In that way, His Holiness accumulates frequent flyer miles,” he followed, with a glimmer in his eye.

Tenzin Taklha rarely chaired any meetings, and never pulled rank throughout the five months of weekly conference calls and all day meetings as we neared His Holiness’ unannounced special visit to San Francisco. Instead, he encouraged rotating “wisdom guides” to lead the discussions. He seldom spoke, and when he did, it was only to remind us about our ultimate goals for this historic gathering, and to ask us to reflect on the best path to meet those goals addressing the issues of humility, equality, and gentleness plus security in every decision that we made.

He fielded everyone’s suggestions with equal care and respect. From the Imam who extended the initial invitation to have the dialogue with His Holiness, to the anxious IT person who had to show him how to use a laptop. Instead of objecting to any point of view, Tenzin Taklha would offer an affirming insight and gently ask all around if anyone could add his or her personal experience to the issue at hand. No doubt, what all of the attendees experienced during this gathering was totally shaped by the confluence of Tenzin Taklha ’s unassuming wisdom.

Tenzin Taklha consistently redirected our attention to the value of equality and courtesy for all. For example, he made certain that we scheduled private sittings with His Holiness for all of the hotel kitchen help, the housekeepers, and the bellhops who serviced the event – in the same room and using the same seats reserved for celebrities. High ranking politicians had to wait their turns while His Holiness the Dalai Lama chatted with two dozen high school volunteers who had spent countless hours cutting the thousand ribbons that would carry the guests’ individual messages for worldwide peace.

He also asked us to organize the gathering so that no one would be turned away for lack of money, especially, members of the Tibetan refugee community. Filled to the brim with more than one thousand guests, we did not set aside any VIP seats, no cordoned-off celebrity sections, or high-end donor photo sessions with His Holiness. Tenzin Taklha ’s leadership style was marked with overpowering gentleness, deep humility, and absolute self-discipline.

To this day, I find myself returning to the lessons I learned while organizing that special visit of His Holiness in San Francisco. I have sweet memories of Tenzin Taklha ’s quiet presence, steadfast self-control, and affirming and inspirational practice of unifying the often disparate organizing committee members. I now know that these are the ingredients that can help us transcend the sense of self-importance and ego that often get in the way of our becoming effective leaders and capacity builders.

Beth Rosales participated in Rockwood’s Art of Leadership for Women Working in Racial Justice and Human Rights in 2011. Are you a Rockwood alum who has a story about leadership you’d like to share? Email us!